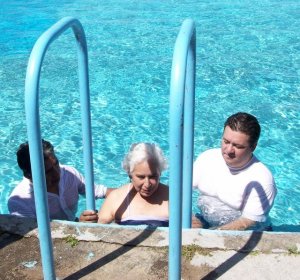 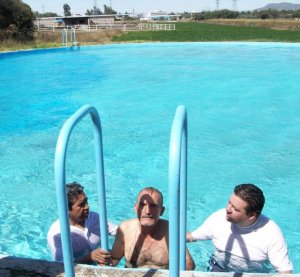 Yesterday I posted a riddle for you that goes like this:

If there were 11 baptized from the church but there were 13 baptized in all, where did the other 2 come from?

In all my years of attending numerous churches, I am quite sure I’ve never before come across such a situation as we experienced during Sunday’s baptismal service.

As the church leaders were completing the last one or two baptisms of the 11 from our church body, a little orange car drove up and an older couple came running up to where we all stood watching the baptisms. Somehow, even though we were out in the middle of isolated farm land, this couple had come enthusiastically wanting to be baptized. They said they were from Toluca (3 hours away) and wanted to know if the leaders would baptize them. No one in the church knew them. I have no idea how they even knew we were there or how they found us. But they did.

Now there’s something you don’t see…ever! At least none of us had ever seen this happen before. So, what do you do?

The church leaders had a little pow-wow and decided that a couple of the leaders would pull them aside and talk with them to see if they were truly believers. Turns out they were convinced that this couple understood the Gospel and had a genuine profession of faith. So…they baptized them!

It was an interesting thing to watch as the missionary body is working hard at letting the Mexican brothers make decisions and go with them. I wonder if the leaders even knew how befuddling this question might have been for us as missionaries. We could only glance at each other in perplexed wonder at how they were going to deal with this unusual situation.

What would your church leaders have done? I don’t know…but I suspect that many would have chosen not to baptize them but would have encouraged them to come back to future church services and be baptized at a later date after getting a chance to know them and to see evidence of their faith in the context of the local church fellowship. In this case, that didn’t appear to be an option as they are from a large city hours away and it’s possible that they have no church in their area to even attend. It’s not an easy question to answer.

Certainly, no one knew this couple. How do we really know they are believers? Then again, they were able to correctly answer the same questions given to all the others who were baptized. If they are truly saved but have no way of being baptized where they live, who wants to be among the church leaders to say that these professing believers can’t obey Jesus because we refuse to honor their request to baptize them?

That’s an interesting point about the ordinances of the Church. They are a part of obeying Jesus Christ’s commands, but unlike most other examples of obedience to Christ, they can’t be done yourself! You can’t baptize yourself…it takes someone else to baptize you. A fitting example is our salvation in Christ that is a gift from God and not by works. Likewise, you can’t take communion IN communion without other believers. There’s a context of a local body of believers for both of these ordinances.

Discipleship is another key word in CAM. In fact, our entire mission structure and focus is even now in the process of being totally evaluated and changed as we renew our focus on being disciples who make disciples. Can you make a disciple of someone you’ll likely never see again? Jesus said to “make disciples, baptizing them….” Should you baptize someone if you aren’t actively discipling them?

One thing is for certain, I don’t recall ever coming across this hypothetical case (now a real case!) as to what is the correct procedure for dealing with a stranger who comes to a baptismal service, professing faith in Christ and wanting to be baptized. (keep in mind…my background and training is in education not church planting…for all I know this is covered in-depth in Ecclesiology courses in seminaries everywhere and I just wouldn’t know it)

I was reminded of Philip who led the Ethiopian eunuch to trust in Christ. As they rode in that man’s carriage they saw a body of water and the man said, “Look! There’s some water! Why can’t I be baptized?” And they went down into the water, Philip baptized him and then the Holy Spirit took Philip away and the eunuch never saw him again. There’s a case where Philip baptized a man he certainly never discipled.

We may never see these two believers again, but they’ve obeyed the Scriptures and have publicly identified themselves with the death, burial and resurrection of Jesus Christ.

I’ve come to a personal conclusion that IF there was something done wrong here, the leaders’ actions reflected their desire to genuinely serve and honor Christ from a clear conscience. I don’t see any wrong in this. If the couple should not have been baptized for reason of a lack of genuine faith, it will fall on their own heads and their own conscience as it was their statements which were accepted as true and honest.

I don’t see any difference in the example of a stranger in a church service being invited to take communion based on his own profession of faith even though no one in the congregation knows him or her. Both ordinances are meant for true believers but in the end, the reality of their faith is between the individual believer and God. May God be glorified in the lives of all those who were baptized last Sunday even the two we don’t really know.

3 Responses to The Riddle