A group of Mexican believers who homeschool their children (relatively rare in this country) spent a few days at Camp Koinonia last week for a family homeschool camp.

A few months ago the organizers had asked Bethie to do a couple of math workshops since their camp was to focus on educational topics. On Saturday Beth drove up to the camp with Karin Rountree (a visiting CAM Mobilization staff member) and did two hands-on math-based crafts revolving around Pi and something that involved spirals and dots…and I have no idea what it was. Hey, I’m a rocket scientist not a mathematician…or something like that.

Speaking of math, one of our recent blog guests has this math joke posted on his own math-based blog (http://blog.hoppermath.com/), and he found the joke somewhere else on the Internet…so this is original with someone, somewhere(!):

One day, Jesus said to his disciples: “The Kingdom of Heaven is like 3x squared plus 8x minus 9.”

A man who had just joined the disciples looked very confused and asked Peter: “What, on earth, does he mean by that?”

Peter replied: “Don’t worry – it’s just another one of his parabolas.” 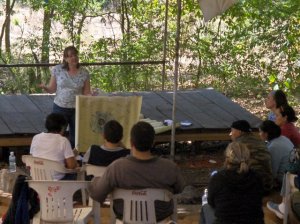 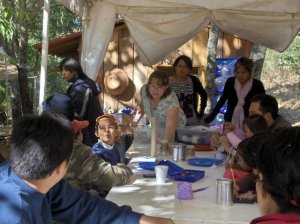 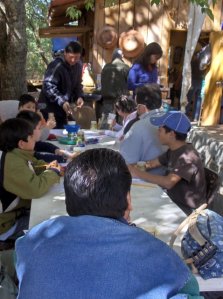