Life keeps bumping along here in Mexico.  Not a whole lot of exciting things to report but I still gotta post on the blog, right?

We had a “despedida” on Thursday for the Brown family.  This means simply a “good-bye party.”  Alan and Phyllis have been serving in Mexico for a number of years and a few years back they adopted 6 Mexican siblings.  The kids are great and most, if not all, of them have trusted in Christ.  They’re such sweet kids.  We love them all.  However, they’ve recognized some issues from the past that just can’t be dealt with while living in Mexico.  They’ve decided for the health of their kids, they need to move to the USA and right now.

On Wednesday I rode to Celaya with a co-worker, Brock Hower, to deliver Brock’s huge trailer to their house.  The Browns are packing it up and Sunday afternoon I’ll head over to Brock to get it again and then back to Queretaro to spend the night with Bryan Smith and his family.  Early Monday, Brock, Bryan and I will caravan with the Browns to Laredo, TX.  On Tuesday morning, we’ll unpack the trailer into a large U-Haul and see the Browns off.  Oddly enough, they’re moving to the Cleveland, Ohio area.  So, they’ll be the Cleveland Browns.  🙂

The rest of the day on Tuesday will be a blur at Wal-Mart, SAM’s Club, Kohls, Academy Sports, and whatever else we can fit into the few hours of shopping.  My shopping list continues to grow but for the first and probably only time ever, we’ll have nearly unlimited space!  I expect it to be an expensive day!  Finally, I can get Cameron a bicycle he can ride for the next few years.  I’ll probably go with a 26″ bike so he should be able to wear it out.  We’ll head back on Wednesday morning.

Pray for our travels, for the border crossings and that the police won’t hassle us.  Brock got the worst hassle with this trailer last month when he brought it back from Texas.  What was odd to us was that the hassle was from the US police.  “Special Operations” nearly took him apart looking for missiles, guns, ammo, C-4, grenades, etc.  Nothing to hide and nothing to fear…but nearly 3 hours standing in sleet while being interrogated and searched over by a US official is not a happy event.  We pray we don’t have that happen again.  This time we won’t have a wife and 4 little sweet faces in the back seat to help back up the truth to our situation and travels.  Three white guys heading south with a nearly empty and huge trailer?  Gotta be something wrong, right?  Wrong!

We hope the weather holds up nicely.  We’ve had a lot of rain this month and it NEVER rains here in February.  No one remembers rain in February here.  It’s an odd weather pattern.  The roads are pocked with huge potholes.  It’s quite a mess.  Drivers don’t slow down and we see a lot of wrecks.  Wednesday it rained hard and Brock and I passed a car upside down in the median and later saw two trucks had tangled.  A box truck was zipping along and smashed into a slower semi truck and trailer.  Nothing unusual here, but it’s always a bit unnerving to see it.  God is our rock and guide and he determines our steps!  We’re grateful to know this!

I found this photo of the accident scene on our local online newspaper. 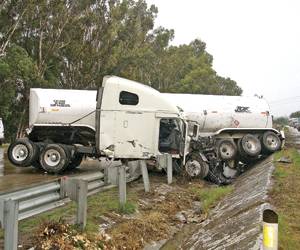 Today as I was coming back from Queretaro it struck me once again how different it is to drive here.  Zipping along in the fast lane at about 80 mph is way faster than I drive in the US.  However, the other two lanes are death traps with trucks and cars going so slowly that they get rear-ended all the time.  However, 80 mph is fast enough to get into the fast lane but I still have to briefly get over at times to avoid getting run over by cars traveling at 90+mph.  What really struck me was how I was seeing pedestrians run across in front of me at these speeds!  I passed a wobbly bicyclist coming toward me on the narrow left shoulder.  It’s really quite a crazy combination of things on and off the road (I shouldn’t mention the prostitutes on the side of the highway too!)  It’s just a different world here from what we’re used to back in the USA.  And yet, I’m pretty much used to it!

Gotta get moving…have an ESL class in 35 minutes and need some pages copies on the way over there.  We appreciate your prayers!