When Symbols “Cross” the Line

We live in a country that is filled with religious symbols. Not all of them are idolatrous. Unfortunately, there are plenty that are.

We’ve never been ones to wear crosses or hang them in our home. There’s nothing wrong with the cross. It is a wonderful and meaningful symbol.

I came across this piece of jewelry on a website that I think demonstrates when a symbol crosses the line. 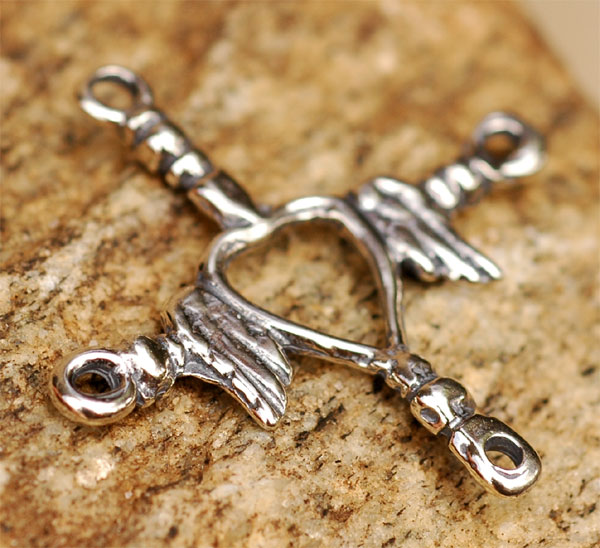 The creator of this piece explains it as follows:

Cast from an original pendant. Originally these Pendants came from Oaxaca Mexico, from a small town called San Juan Yalalag. They have been made since the 1500’s. The open ends are for attaching little Milagros.

Notice the final phrase: “for attaching little Milagros.” “Milagros” is the Spanish word for “miracles.” What does that mean? You can probably guess.

Here’s a simple website with an explanation that seems to cover it well enough. Here is another interesting website. I doubt there is a Catholic church in Mexico that doesn’t have some of these “milagros” hanging around or pinned somewhere inside. Usually, there are hundreds if not thousands of them visible in most churches of which I’ve ever peeked inside.

Here’s a lengthy excerpt from the first link above:

A milagro (“miracle” in Spanish) or ex-voto (“from my vow” in Latin) is an image offered to a deity or saint as a form of prayer or wish, or in thanks for desires fulfilled. Modern Catholic and Orthodox European ex-votos and colonial Latin American milagros have their roots in neolithic offerings and votary figures of the bronze age which were continued in the traditions of ancient Greece, ancient Rome, Catholicism, and Hinduism. Ex votos exist at the boundary between object-oriented magic and devotionary prayer. They have a record of thousands of years of use in many cultures.

Some Catholic ex votos take the form of a published notice of thanks to a Patron Saint for help in a specific situation. The most common of these are newspaper classified ads that read, “Thank you, St. Jude.”

Other ex-votos are images of what is to be or has been helped. Some may be in the form of a body part to be healed or enhanced (such as the pair of eyes, leg, and arm), while others are made in the form of domestic animals to be cured or purchased (such as this cow). A third group represents important possessions to be protected, such as a car or a crop of wheat with a sickle. A fourth type straddles the line between luck, protection, and religion and may assume the form of a praying person giving thanks, while a fifth variation utilizes the iconography of actual deities, such as the flaming heart of Jesus or a cross of crucifixion with a heart st the center. .

Ex-votos and milagros are made of many materials, including wax, wood, glass, pottery, plaster, and cast or stamped metal. In Bolivia and Peru, those made of sugar are called mysteriosos (“mysterious things”) and are used to decorate altars and statues of Ekkeko, the Andean god of abundance.

Prayers may be written on milagros. (e.g. “Health”) and they may bear the name of the being on whose behalf the prayer is being made or the name of the entity whose help is sought, but these touches are not necessary. As magical artifacts, they are activated by placing them in a sanctuary or shrine, often pinned to the clothing of a statue of the entity whose aid the donor wishes to invoke. In ancient Greece, ex votos for healing were taken to a temple of Asclepius, the healing god; modern Catholics place theirs in a church that contains a shrine to the patron saint of the cause for whom the prayer is offered; Hindus often dedicate certain noble old trees to the hanging of ex votos; in Peru, the Quechua Indians place mysteriosos on Ekkeko or bury their munachi figures, munaiwarmi stones and illas, canopas, and other votary offerings in Pachamama, the scared Mother Earth.

Once at the shrine or sacred place, a prayer is made to the entity whose aid one seeks. In some cultures candles and incense may be lit. A vow is then spoken which will be carried out if the prayer is granted and the image is offered to the spirit of the shrine as a token of the vow (hence the name “ex voto”) and hung up there for all to see. Typical vows include promises to donate a certain amount of money to the upkeep of the shrine, or to give a certain amount of money to the poor, or even to perform penance, if one feels responsible for the problem.

In some cultures if the prayer is granted, an addition may be made to the ex voto. For instance at a church in Bad Tolz, Germany, i once saw a framed ex voto from the early 1800s reverse-painted on glass which depicted a man falling from a roof and the words (in German) “St. Jude, help me!” This had been placed there by the family of a roofer who was seriously injured in an accident. Hanging from the painting’s frame by two little chains was a smaller framed painting of a floral decoration and the words “He helped!”

The stamped metal milagros shown at left and right above are from Peru. The small stamped milagros in the center image are from Mexico.

The cross is a beautiful symbol. The One who hung on the cross is He who gives the symbol its beauty. Ultimately, the symbol, like all symbols, is not the reality of “the thing” that it represents. In this case, “the thing” is Jesus, the Son of God, the Passover Lamb, the King of Kings and Lord of Lords. There is no symbol that could ever take the place of Him. He is our Reality. The cross is only a symbolic reminder of Him whom we should revere…of Him whom we MUST revere. May we never revere the mere symbol.

It may sound like a fine point using words, but it is far from denoting a fine line. There is an eternal difference between a symbol representing a heavenly reality and a symbol that reveals an earthly idolatry. May we never cross that line.