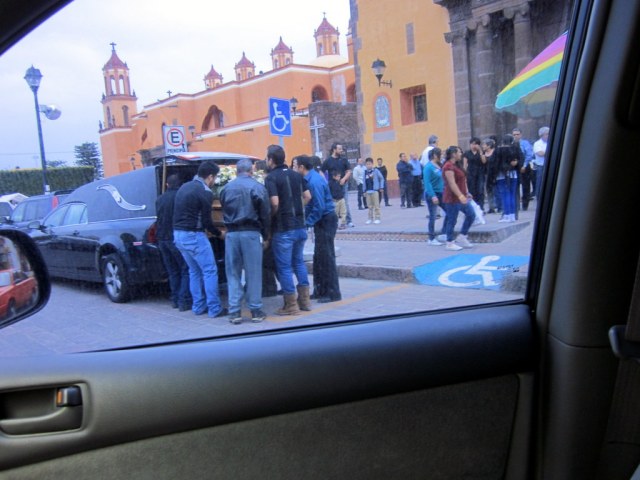 I dropped Beth and Cameron off at the local dentist’s office this morning.  Cameron had 2 wisdom teeth surgically removed from the bone as they were developing at a nearly a 90-degree angle into the molars in front of them.

I drove around the large Catholic church a block away and was surprised to see a casket being carried to a Cadillac hearse just a few feet away from me.  As I drove by, I whipped out my little camera and snapped a shot.

Another reminder of how brief life is.  I was thinking about that for the next 1/2 mile as I drove back to the house.

It turned out to be a fitting theme for reflection as in that 1/2 mile of driving I avoided being plastered by an old pickup truck that roared through a red light as I was approaching the intersection.  Two blocks and about 10 seconds later I avoided being smashed by a multi-ton flatbed truck fully loaded with cement bags as he blew threw a stop sign.

I’ve been in two houses in the last month that were struck by lightning.

It’s good to know that the Lord holds our lives in His hands and every breath is ordained by His provision and care.  We can’t add to the number of them nor subtract from them either.

The Billy Graham Association film we viewed a few weeks ago in Florida and then showed to our house church last Sunday contains a few blurbs from Graham (“Billy”) preaching and saying, “We’re all dying.  From the moment you were born, you started dying.”  How true that is.  It’s also true that we are to live every dying moment for the glory of God.

As I returned to the dentist’s office an hour or so later, I rounded the corner of the big church again.  This time I wasn’t fast enough with my camera to snap a shot of a bride and groom leaving the same doors as the casket had passed through earlier.  What a contrast.  The grief of death and the joy of life and a new life of relationship.

It makes me think of the passage, “As it was in the days of Noah, so it will be at the coming of the Son of Man. For in the days before the flood, people were eating and drinking, marrying and giving in marriage, up to the day Noah entered the ark.”  People continue to be born, to live, to marry, to have children, and to die…every single day, throughout every inhabited place on the earth.

Hmmm…these really are as in the days of Noah.  Looks like the clouds are getting dark.  Wonder if lightning will strike today.