Permisos, Passports, and Pilgrimages…OH MY!

Looks like I’ve done a good job of avoiding posting anything here for another full week, so maybe I should give a quick…hahaha…update.  Of course, you know that brevity and concise writing are foreign concepts to me.  I’ll try.

First…PERMISOS.  If you’re thinking that Spanish word looks like the English word “permissions,” you’d be right on track.  You see, getting our vehicle nationalized has involved a couple of these things.  Documents that give us permission to drive the vehicle.

At the border, I had to give the customs agent $1650 USD cash to cover the import costs and fees and taxes and anything else that was being paid in the process (don’t ask, don’t tell…is the apparent legal process), while sitting in the van with my co-worker, inside a large parking lot turned into a large vehicle processing area that must have been an amazing sight looking down from about 100 feet above us.

I also had to also pay cash in Mexican pesos to a government agent for a permiso document that would be placed in the windshield.  This document gave us the right to drive our vehicle in Mexico from that spot to our home destination and hopefully, to the local license plate office here in San Juan.  We were told that a very important document, basically the Mexican title, would be emailed to me in about a week, and that it would be necessary to print this and produce it in order to procure the state license plates.  Simple enough.  EXCEPT, the permiso was only good for 5 days which would be a few days short of getting the email that I’d need in order to get the plates…which means I wouldn’t legally be able to drive to the place to get the plates because the van needs to be physically present there for an inspection in order to get the plates.

So, I asked if I could have more days.  Why of course.  Using fingers and toes for computational purposes, I was then quoted a figure of $50 pesos per day for each extra day.  Hmmm…well…give me 5 days…that’s $250 pesos (an extra $20 USD).

That worked out well because we actually received the email only 2 days later but it was a Friday and there wasn’t time to connect with my co-worker who officially owns our van at the moment!  So, by Tuesday, he was able to come down the mountain and go with me to get the license plates.

At the counter of the license plate office, all was going swimmingly well until the lady announced that we couldn’t get the plates that day.  The system spit out a supposedly random hold in order for research to be done to do a background check on our import papers from the border.  This would take 30 working days to complete.  Come back then.

But my temporary permiso for driving would expire on Friday!  Not to worry…they gave me a paper that I could take downtown to the transportation office to request a 30 day permiso.  So, over to “transito” to request the 30 day permiso.  This was granted at a cost of $159 pesos.  Oh…but 30 calendar days…not working days.  There’s a difference.  So, could I get more than 30 calendar days?  Absolutely, without question…NO.  Oh.

So, that means we can drive legally anywhere, without plates or any other registration requirements met for 30 days.  That expires February 12.  The 30 working days should come to about February 24th.  So, that means after February 12th, we can’t drive our vehicle.

Not to mention you have to have liability insurance to legal drive a vehicle in Mexico.  At the border there are a number of insurance companies with offices right there in the immigration office building.  Only ONE insurance company could actually sell this to us because of the limited legal standing of the van at this point.  So, for $1244 pesos ($100 USD) I could and did buy a one-month policy which was apparently all I could purchase.  That would expire on February 6th.  Hmmm…so, unless I can buy another month of that insurance, then we can’t drive after February 6th either!

What does this mean?  It means that by about February 3rd, I’m going back to the license plate office and checking on whether or not they’ve completed that background check and seeing if perhaps we won’t need to wait an entire 30 working days to get the plates and get all this settled!  What a PROCESS.

As a side note, one good thing came out of this.  Getting the 30 day permiso at Transito found us at the same place where one gets a Mexican driver’s license.  So, for about $50 USD I was able to pass the eye exam, pass an English translated version of the driving exam (and that was a weird test), and passed the simulated physical driving exam.  Actually, I think I failed that one but the lady passed me anyway.  Ha.  I didn’t realize the simulator had a seat belt attached to it and about halfway through that exam the lady told me I had already failed because I hadn’t done something very important.  I stopped the car and was trying to figure out what it could have been.  She finally told me.  I never even saw the seat belt and wouldn’t have thought to look for one.  It was a strange testing situation.  I put it on and continued and she passed me.  Nice lady.  I did tell her that in a real car, I ALWAYS put on my seat belt.  It’s a forever habit.  I couldn’t help but laugh when I started backing out of the parking lot and realized…I hadn’t put on my seatbelt!  I guess I was flustered!

In other news, the boys’ U.S. PASSPORTS expire in early April.  So do our Mexican visas.  We need to turn in our passports to our immigration lawyer in early March.  Can’t do that if the boys’ passports are about to expire, so we have an appointment for Tuesday the 21st at the U.S. consulate about 90 minutes’ drive from here.  Of course, we need passport photos in-hand.  PROBLEM.  In San Juan del Rio, you can get overpriced passport photos…correct size (2″x 2″) BUT none of the photography shops will accurately center the faces according to the US State Dept. requirements…and they are picky.  Last time we did this, we didn’t know that.  We thought we had good photos from here and the consulate rejected them.  That was a waste of about $30 USD in photos.  Live and learn.  I found a British shop owner in Querétaro who claims he can do them and showed me his software setup and how he ensures the correct facial dimensions.  It looked good.  He was cheaper too.  Both boys for $200 pesos (about $18 USD) and in about 30 minutes which was great.  Got that done yesterday.

And PILGRIMAGES…couldn’t help but notice all week long little pilgrimages coming from south to north through town and on to Querétaro.  They may be walking on to San Juan de los Lagos in the state of Jalisco where there is a corn husk doll of the Virgin that supposedly healed two people over the last century via prayers to the Virgin/doll.  Sometimes pilgrimages will go over there which is about 200 miles from here.  That’s a good walk…carrying flags and crosses and boxes with statues of their local Virgin doll in it.   Usually, these pilgrimages come through in large groups, sometimes over 10,000 people.  This week, we saw dozens of them, usually with about 20 people in them.  Never seen that before.  Regardless, these are always a sad sight to see.  Nothing redeeming in good works…trying to weigh one’s bad works with doing good works.  It’s like trying to clean a person submerged in a sewer filled with sludge with an eye dropper which is also filled with sewage.  All our good works are as filthy rags. 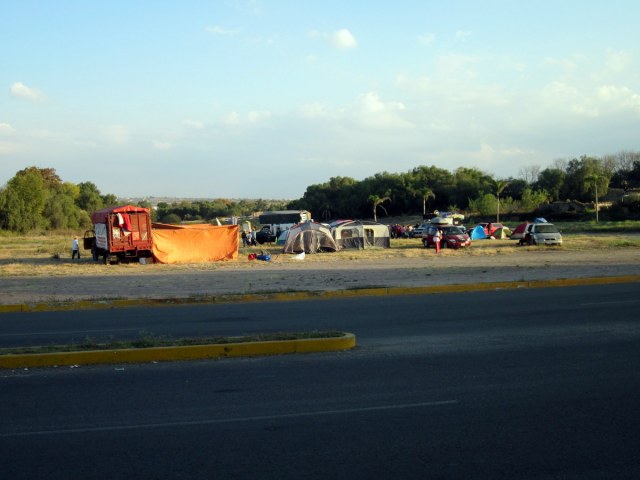 Finally, and a little off-topic here, but I found this amusing.  I made an initial attempt to try make our own passport photos.  It is possible but not terribly simple in my estimation.  I finally decided to spend the money on fuel and time and pay for the passport photos to be professionally done.  However, I was looking over one of my images of Dayton and as I looked at a paper printout of it, I thought…I’ve seen this face before and it wasn’t Dayton’s!  Where did I see this?  Who am I thinking of?

…and here’s the kid from the movie “Mr. Bean’s Holiday”: