Putting the Zoo in Zumba

Zac and Jennifer are co-workers here in Puebla who are on the tail end of their initial language study here in Mexico. I don’t know them real well yet, but I’ve enjoyed getting to know them a little better since we’ve moved to the area. Jennifer is a pro when it comes to all-things-dance. Zac told me that she’s done all sorts of dance since she was 6 years old.

I really don’t know much about all that, but I can tell you, she’s an expert at Zumba. In recent months she has started a set of Zumba classes as a way to make new contacts for sharing the gospel. I think it’s going to be successful.

Somehow, she received an invitation to lead a one-hour Zumba class/demonstration at a ritzy department store (called Liverpool) at one of the nicest malls in Puebla. Very upscale. Earlier this past week, I ran into Zac and Jen at the seminary, and after hearing about the opportunity at the mall, I discovered they didn’t have anyone to take pictures of the event while she led it and Zac handed out flyers for their weekly Zumba classes. So, I offered to help out by taking pictures.

What was I thinking?!? Zumba is definitely something I would never want to be caught doing let alone watching! But, I was happy to be able to help them out a little and see if I was capable of getting some pics they might be able to use for their ministry.

In the process, I learned a lot about my camera and what it is and isn’t capable of doing…as long as I’m the one using it! It was a challenge, but I think we’ll come up with a handful of decent pics out of over 800 that I took. I still have a good bit of photo-editing to do, but I managed to work on a few last night after the event.

One pic that I liked shows Jennifer leading the group of ladies and one of our MKs (Lillian Bult) who apparently was mid-jump. She looks like she’s floating. I don’t know if the picture appeals to anyone else, but I really like it.

By the way, they had about 10 women sign up for more information about their classes and many others took flyers. There were over 10 women who they did not know or have any contact with before the event who participated. Some only came for part of the hour. It was quite a workout, and anyone who stayed for the entire hour was definitely sweaty by the end of it.

Great job Jennifer and Zac! I think their ministry will be met with much success as they begin to connect with the ladies who participate. Praying that God will use them to that end and that many women and their families will eventually come to faith in Jesus Christ through their relationship with J-Z!

Here’s the pic I mentioned above (and a few others): 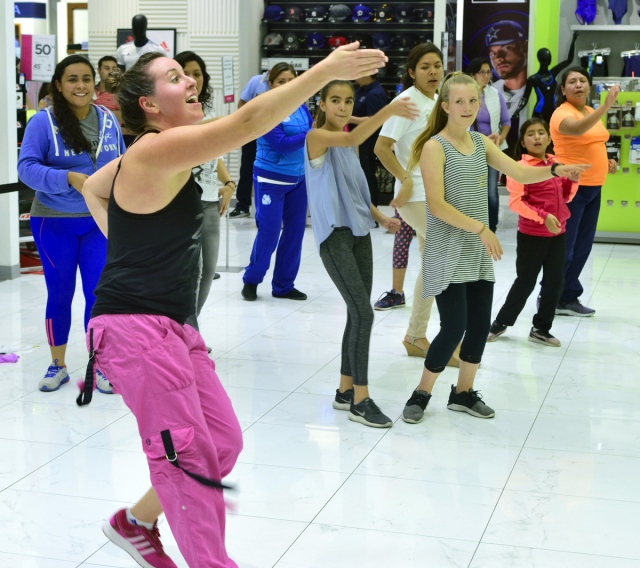 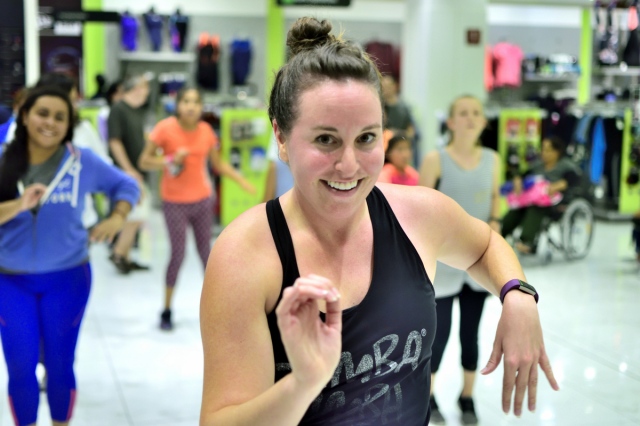 And finally…a cute kid who insisted that I take his picture (yeah, why not?!). 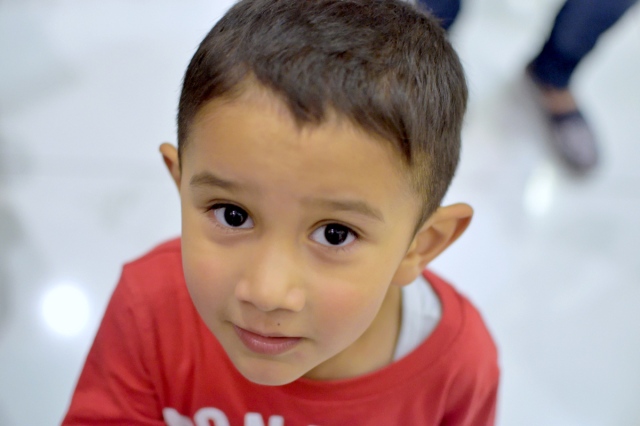 This boy’s mother wasn’t going to sign up for more information (via email) about the Zumba, but she did anyway because she wanted a copy of the picture emailed to her! Oh and the little guy did join in for a little Zumba himself…sort of freestyle, but he was definitely moving!

And I survived the traumatic event while enjoying figuring out the camera work as best I could. (By the way, getting a picture while a whole group is moving, while getting the leader in the shot, and getting a good facial expression, and not getting something undesirable in the background, getting it focused just right, with the right amount of bokeh (background/foreground blur), etc. is truly a challenge…at least for me! It was fun though!

Oh, and did you spot the solid black mannequin above joining them in the Zumba routine? Didn’t even see that until I was editing the picture at home. 🙂

Here’s a stock photo of Zac and Jennifer (I didn’t think to take a picture of them the event required their full attention and concentration):