This little street shack, Marisma, was our favorite restaurant of the week. We liked the fried fish tacos and the smoked marlin tacos. Actually, I didn’t care for the latter. It tasted like vegetable soup to me. B & C said that’s why they liked it! There wasn’t much fish in the smoked marlin taco and it did come with chunks of potato, carrot, and a vegetable soup flavored sauce…and tiny pieces of smoked marlin (apparently). The fish tacos were freshly made and just about anything fried is going to float my boat. They were $20 pesos apiece (about $1.60 USD). I ate 5 per sitting and floundered away stuffed each time.

The third pic down is of fish tacos from Joe Jack’s.  Five years ago we left that restaurant dreaming of those scrumptious creations.  This time the experience was forgettable.  We were so disappointed.  The fish was mushy and apparently, they’ve changed some things there.  It isn’t the same.  We didn’t go back and wouldn’t go back unless it ever went back to the way it once was.  Too bad. 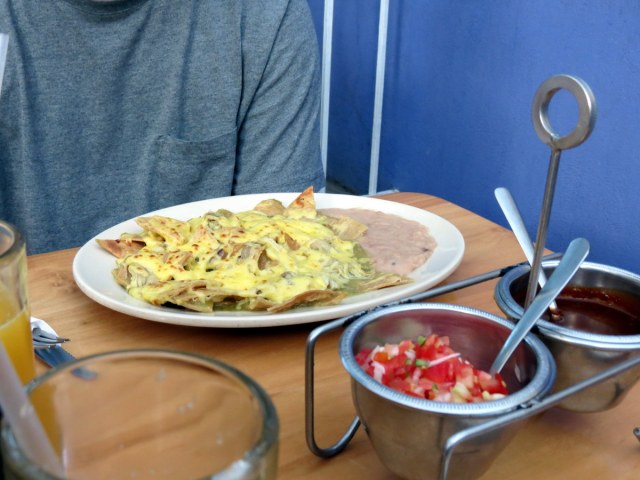 The Pancake House served us cheese blintzes (two pics above), chilaquiles (above), and D had a stack of 3 pancakes (and ended up taking two home), and I had a waffle with eggs and bacon.  All were tasty.